Home   ››   Osteonecrosis of the humeral head

Osteonecrosis of the humeral head

What is Osteonecrosis of the Humeral Head?

Osteonecrosis of the humeral head or aseptic necrosis describes the pathological condition in which the bone is decaying after interruption of its blood supply and mainly concerns areas of our skeletal system located in the most peripheral parts of the bone vascular system.

Osteonecrosis can be the result of an injury that caused a fracture or non-traumatic reasons, which are described below and mainly concern the hip joint, while also affecting other joints, including the shoulder (humeral head).

Normally, the shoulder joint (glenohumeral joint) is a structure consisting of: 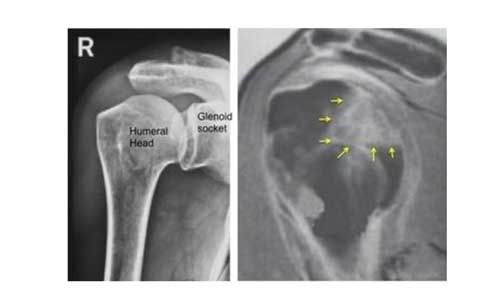 In aseptic arm necrosis the blood supply is interrupted and part of the bone is decayed and deformed (collapses).

When the blood flow to the humeral head is inhibited, the bone is decayed.

This is not the main problem though; the physical reaction of the body is the reason for several problems.

As the bone dies, blood flows back to the bone and the osteoclasts remove the necrotic bone in order to be replaced by new healthy bone (osteoblasts).

Throughout this process an imbalance is observed, where the necrotic bone is removed faster than it can be replaced and this results in the bone settling as it is, since it is weaker than normal bone.

Finally, the cartilage that overlaps the articular surfaces breaks down as it loses the support provided by the underlying bone. 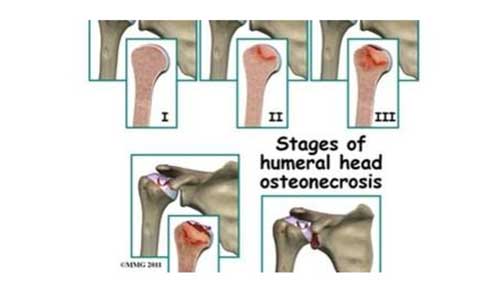 Patients who have fractured the humeral head are at risk of osteonecrosis.

After fracture of the proximal arm, blood flow is disturbed and as a result the bone is decayed.

The appearance of ischemic necrosis depends on the fracture and degree of fracture displacing.

Another common cause of osteonecrosis of the humeral head is the effect of steroids (e.g. cortisone) administered for the treatment of other pathological conditions.

Steroids are believed to damage osteocytes and osteoblasts by initiating the osteonecrosis sequence.

Caisson’s disease is caused by a sudden change in water pressure and a change in the solubility of nitrogen that alters and creates blood bubbles that damage blood flow in the femoral head. 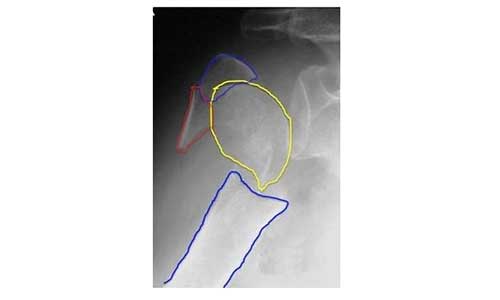 What are the Signs of Osteonecrosis?

Osteonecrosis is usually exhibited with pain and less often with shoulder noise (cracking) during movement.

Joint movement is limited due to pain.

About 50% of patients who develop atraumatic (fracture-free) osteonecrosis of the shoulder will also have other joints involved. 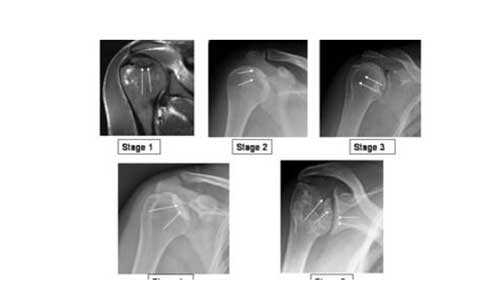 How is Diagnosis made?

During early stages, osteonecrosis may not be apparent in classic X-rays, but it can be visualized with the help of magnetic resonance imaging.

As the disease progresses, the femoral head subsides and arthritic lesions become apparent in X-rays as well.

What can be the result of osteonecrosis and when can it be observed?

A study involving 200 cases of osteonecrosis found that about 40% of humeral heads with early aseptic necrosis developed into advanced osteonecrosis.

Decompression surgery with trepanning of the humeral head is a treatment that may be useful during the early stages of osteonecrosis before the head subsides.

It is believed that bone pressure increases when blood flow stops and that pain can be alleviated by decompression of the bone.

In this way, blood flow and faster recovery of the humeral head are stimulated.

The above image depicts the transdermal fixation intraoperative radiography for the treatment of osteonecrosis of the humoral head. Arthroscopy can be useful in some cases, especially when the cartilage is damaged and its fragments cause joint pain. 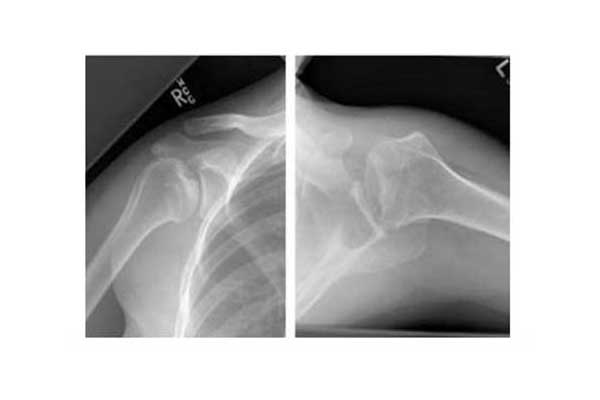 The two X-rays depict an advanced degree of osteonecrosis; the head has subsided with fragmentation and mild degenerative lesions of the glenoid cavity.

The “loose bodies” in the joint are removed arthroscopically as illustrated. 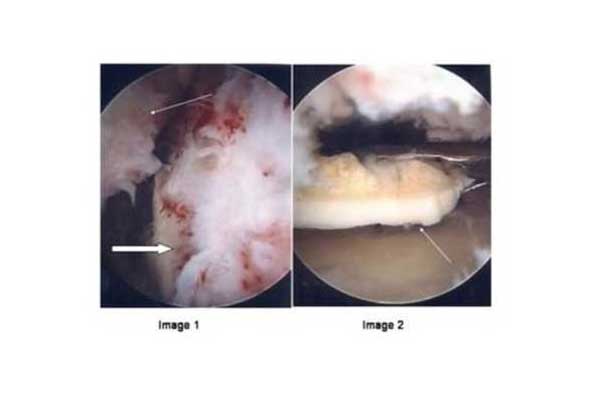 The arthroscopic intraoperative image of this patient reveals a view of the head from the interior of the joint.

On the femoral head, the cartilage has an irregular appearance with thinning.

There is subchondral bone (yellow) and a “loose body” (thin arrow).

The surgical forceps hold an osteochondral fragment with the cartilaginous head appearing white and the necrotic bone appearing yellow.

When osteonecrosis reaches a very advanced stage, the head of the arm may subside.

This leads to pain, and the treatment is similar to that of degenerative osteoarthritis.

There are two solutions in this case: