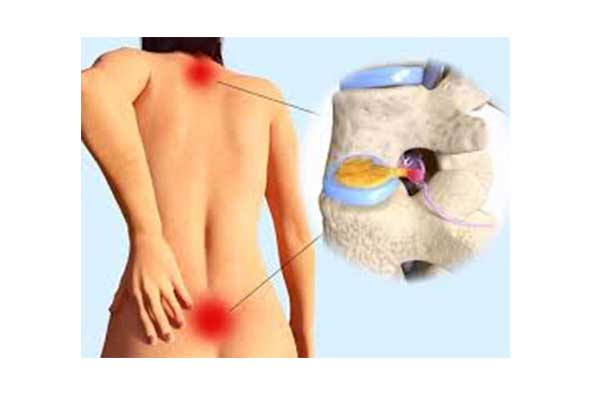 WHAT IS THE ROLE OF INTERVERTEBRAL DISCS?

Intervertebral discs play an important role in the spine. They serve as shock absorbers between the vertebrae. They support the weight of the human body and allow a wide range of motions in all directions.

The intervertebral disc consists of a central nucleus pulposus. It also contains a viscous gel consisting of proteins, polysaccharides, minimal chondrocytes and a large amount of water (88%). It is surrounded by concentric layers of fibrous tissue and collagen, the fibrous ring. When the physicochemical state of the nucleus pulposus is normal, (usually at younger ages) the disc can withstand heavy loads without particular problems.

Over time, the nucleus pulposus and fibrous ring lose much of their properties. For this reason, even small forces and loads can cause the fibrous ring to break and leak. Depending on the location of the damage, pressure can cause pain in the waist (lumbar region), as well as pain and neurological symptoms in the lower extremities.

The symptoms of the intervertebral disc hernia usually begin without any particular traumatic event. Incidents like this are lifting some light weight or turning the waist steeply. It is a common disorder of the musculoskeletal system. It is most commonly found in the lumbar spine between 35 and 50 years of age. At this age, the disc has already undergone significant degenerative changes. In contrast, vertebral stenosis is more commonly found in people over 60 years of age.

Due to the natural process of aging and deterioration, the discs lose much of their content. Under normal conditions it provides them with elasticity and durability. As a result, the disks become harder and flat. This process, also known as degeneration, begins at an early age. It is often depicted early on imaging examinations (X-rays, CT scans and MRI).

When repetitive axial pressure is applied to the spine, the disc and especially the fibrous ring may rupture or crack. In the lumbar spine, the protrusion of the disc can lead to pressure effects on the closest root of the spinal nerves. In addition, the leaking material can irritate the nerve. This can cause local inflammation. The result is an acute feeling of pain that reflects from the lumbar spine to the buttocks and lower limbs. Finally, it is important to note that disc degeneration (discitis) is not necessarily a progressive condition per se. It does not always lead to an intervertebral disc hernia.

Unfortunately, healthcare professionals do not agree with the exact definition of these clinical cases. At the same time, patients feel confused by hearing different terms about the same problem.

Instead of dealing with the exact terms that describe the problem, it is more useful to get a clear picture of the exact medical diagnosis. A medical diagnosis determines the true cause of pain in the lumbar area and lower extremities of the patient.

In order to diagnose, the Orthopedist follows three specific steps:

While disc herniation in the lumbar spine can be extremely painful, for most patients the symptoms do not last for long. About 90% of people who experience symptoms of lumbar disc disease recover within six weeks, even without medical care.

It is believed that the symptoms mainly arise for three reasons:

It is generally believed that symptoms improve because the smaller the size of the disc material, the less is the chance of nerve irritation. At the same time a large part of the disc is absorbed. Although the intervertebral disc hernia requires attention when it is painful for the patient, it has been found that many times the visual appearance of a hernia is not necessarily accompanied by pain or other symptoms.

As mentioned, it is common for a disc herniation to cause pressure effects on a nearby nerve, causing pain that reflects on the entire length of the nerve distribution (i.e., the area that is innervated by that nerve).

The hernia of a lumbar intervertebral disc is the most common cause of sciatica, i.e. pain and tenderness at the back of the lower limb. Some of the most common features are:

Two terms are used to identify the cause that may cause pain in the lumbar spine and affect the intervertebral disc:

When the patient suffers from a symptomatic herniation of the intervertebral disc, the disc itself is not painful. On the contrary, the material (nucleus pulposus) that collapses or leaks from inside the disc presses and irritates the closest root of the nerve exiting the spinal cord. This injury produces a feeling of pain called radical pain. Beyond the lumbar region (back pain) it also reflects on other parts of the body and especially the lower extremities. In the case of the nerve roots that make up the sciatic nerve, it is called sciatica. 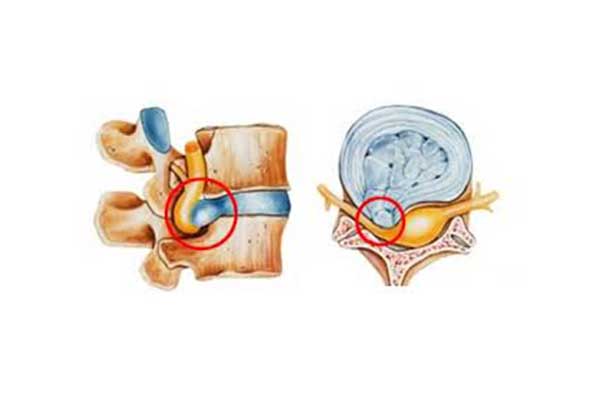 If the patient suffers from significant degeneration of the intervertebral disc, without disc herniation, then the pain is located in the specific area and is exclusively due to degeneration of the disc without reflection in the lower extremities (axial pain).

Any of the above symptoms may affect the cervical, thoracic, or lumbar spine. However, in the majority of cases they are located in the lumbar spine (‘middle’). This is because it absorbs most of the load that the spine receives on a daily basis.

It should be borne in mind that the term “disc herniation” or “degenerative disc” refers to imaging findings of X-rays, CTs or MRIs. Although very important, they are not enough to determine the exact cause of the pain. On the contrary, the clinical picture and physical examination of the patient by the Orthopedist will finalize any suspicion and lead to an accurate diagnosis.

The loss of bladder control (urinary incontinence) or intestine control (fecal incontinence), as well as numbness in the back of both thighs with concomitant weakness in the lower limbs are symptoms of the Cauda Equina syndrome. This is a serious and urgent pathological condition. It is caused by a large hernia that presses on the nerve roots coming out of the medullary cone (Cauda Equina). The patient must be treated surgically within 48 hours in an effort to reverse the neurological damage.

Patients presented with the orthopedic symptoms mentioned above should be asked about:

It is the most important step in the diagnosis and involves the observation of the patient’s movements, as well as palpation in combination with some special tests.

If none of the above symptoms are observed and the level of pain is tolerated by the patient, further imaging is often required and a re-examination is planned.

Imaging is performed on the one hand to rule out some of the rarer causes of back pain, such as fractures, tumors and infections. On the other hand, it is also used to better describe and confirm the findings of the preceding clinical examinations. 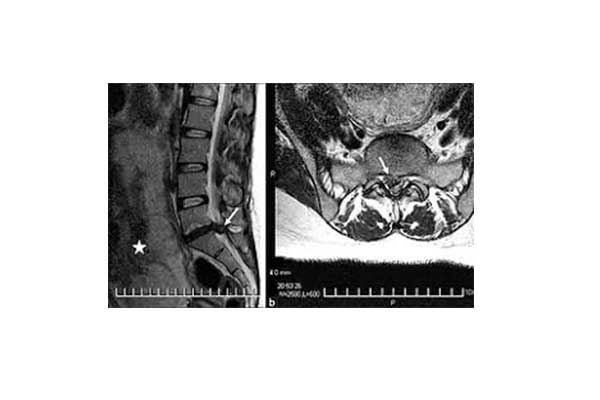 In the majority of cases of lumbar disc herniation the symptoms subside within six weeks. For this reason, conservative (non-surgical) treatment is initially recommended, except in cases where the symptoms include severe neurological problems.

The control of severe pain is an urgent need when the first symptoms arise. Initial options include:

Medication: Non-steroidal anti-inflammatory drugs (NSAIDs) are a class of medicines that greatly relieve the patient. In addition, some muscle relaxant medications can reduce muscle spasm in the lumbar spine.

Epidural infusion of steroids: It may provide long-term symptom relief and relieve the patient. However, it often does not resolve the problem and patients’ symptoms relapse.

Finally, the methods of acupuncture (FDA approved) and chiropractic are also recommended, which may be useful to the patient but only under specific indications for a limited number of patients. The patients should consult their orthopedist first for the diagnosis and exclusion of neurological deficits, as well as for treatment which may include well-known conservative and surgical methods.

When the pain and other symptoms persist and do not subside after a period of six weeks, then surgery is recommended to the patient. The intervertebral disc hernia in the lumbar spine is the most common cause of spine surgery in adults.

Surgery can be recommended if:

In lumbar microdiscectomy, a small portion of the bone is excised above the nerve root along with much of the disc material that presses and irritates it, providing more space. Through a small incision, a “window” opens to the spine about three by four inches in diameter. Anything that can cause compressive effects on the nerve root is removed through this space.

In general, the improvement of the patient’s symptoms due to intervertebral disc hernia is evident in the first six to twelve weeks. As long as the pain is tolerable and the patient is able to function satisfactorily, it is usually preferable to delay the operation for a short period of time to assess whether the symptoms will subside with conservative treatment or not.

If pain and other lower extremity symptoms do not recede with conservative treatment, then the minimally invasive method of microdiscectomy mentioned above is indicated.

Emergency surgery is necessary in cases of cauda equina syndrome or progressively worsening neurological deficits. Finally, severe pain in the lower extremity may also be an indication for surgery.

In conclusion, microdiscectomy is recommended in patients:

With pain lasting longer than six weeks not treated with conservative treatment (NSAIDs, Physiotherapy). However, the results of surgery are best when patients undergo surgery three to six months after the onset of symptoms.

The success rate for the minimally invasive method of microdiscectomy is about 90-95%, while 5-10% of patients will develop a herniated disc again at some point in their lives.

Recurrence may be observed immediately after surgery or many years later. However, it is most commonly observed within the first three months after surgery. In the case of relapse, the revision with the microdiscectomy method is equally successful. However, after a relapse, the patient is at greater risk of further relapses.