The knee is the largest and probably the most complex joint in the body, important for movement. The knee joints connect the femur to the lower limb bones. The sprains of the knee joints are very common in sports activities. In particular, athletes who participate in team sports, such as football, are more likely to injure their lateral ligaments.

The knee joint consists of three bones: the femur, the tibia and the patella. The last one is located in front of the joint and provides, among other things, protection.

These bones are joined together by ligaments. There are four main knee ligaments, which act as strong straps (ropes) to hold the bones in place and stabilize the knee.

The knee rests on these ligaments and muscles for its stability, and is therefore easily injured. Any direct knee injury or strong muscle contraction or even a sudden change of direction while running can injure a knee ligament.

These injuries are called sprains and are treated according to their severity.

Injury to multiple ligaments is likely to occur. These injuries usually lead to serious complications. They may disrupt normal blood flow or nerve function in the lower extremities. In severe cases, multiple ligament injuries can even lead to amputation.

In particular, ruptures in the anterior cruciate ligament may, at the same time, be accompanied by injury to the medial collateral ligament. 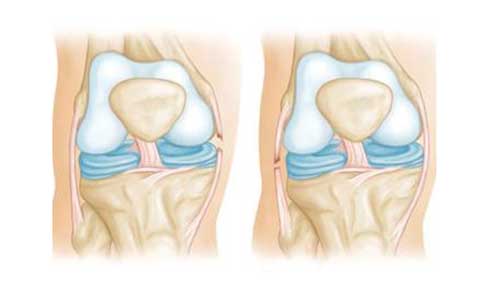 In suspicion of multiple ligament injury, the patient needs a careful examination by an experienced Orthopedist. Depending on the severity of the injury, other specialties such as a vascular surgeon may be needed. In contrast to the therapeutic approach of individual ligament ruptures, the treatment of combined injuries should be performed relatively soon after injury. This is necessary, despite the fact that surgery immediately after injury increases the chance of scarring within the joint. When dealing with multiple ligament injuries, more than one surgical operation may be needed.