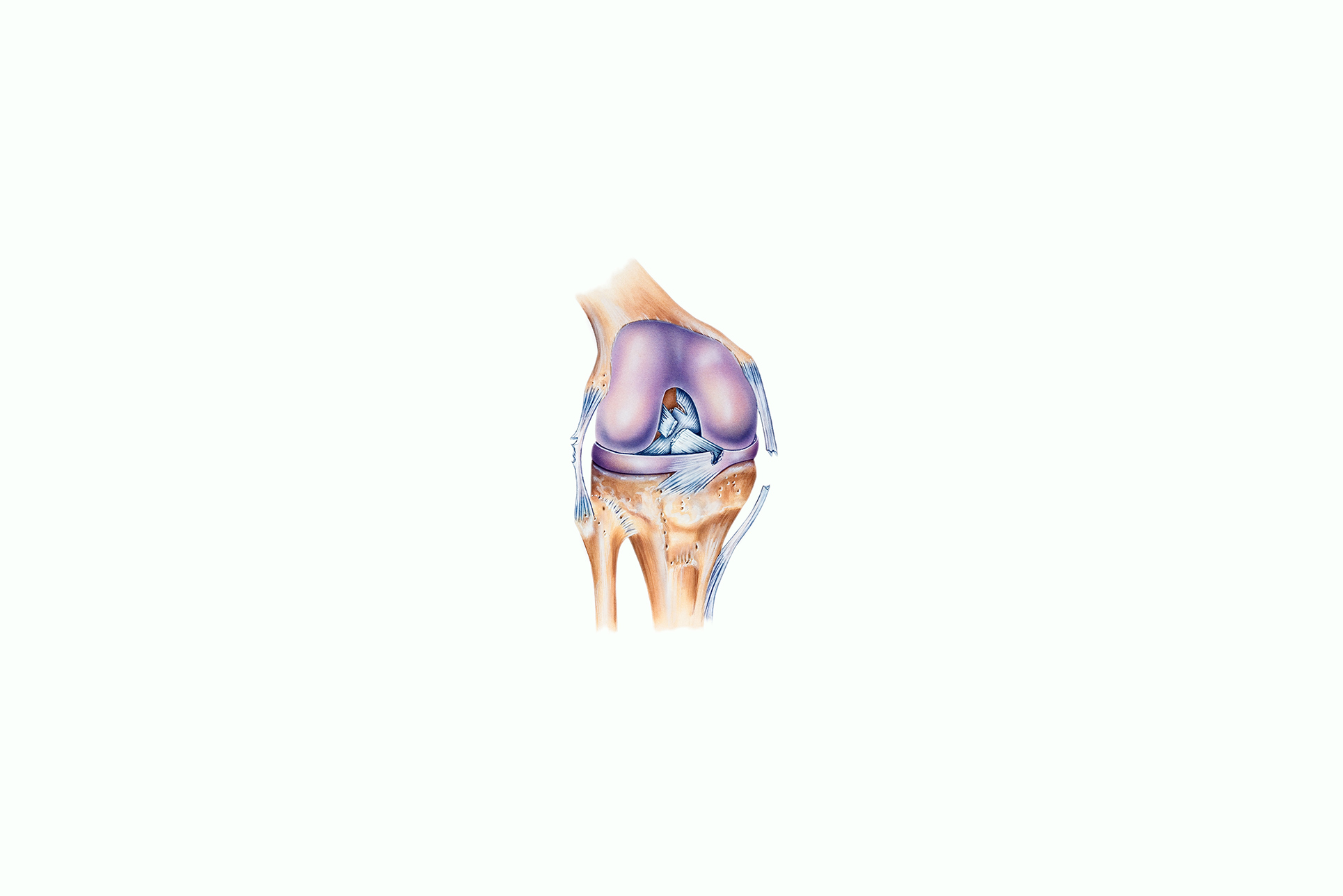 The knee joint consists of three bones: the femur, the tibia and the patella. The last one is located in front of the joint and provides, among other things, protection.

These bones are joined together by ligaments. There are four main knee ligaments, which act as strong straps (ropes) to hold the bones in place and stabilize the knee.

Anterior cruciate ligament (ACL) rupture is one of the most common knee ligament injuries. The incidence of ACL injuries in the US is now estimated at 200,000 resulting into 100,000 orthopedic surgeries. In general, the incidence of ACL rupture is higher in people who participate in “contact sports” or high risk sports, such as basketball, football, skiing, etc.

About 50% of the ACL injuries occur in combination with injuries of the meniscus, articular cartilage or other knee structures. In addition, patients often develop bone edema below the surface of the cartilage, a lesion that is best visualized with a MRI scan and may also indicate injury to the overlying articular cartilage. 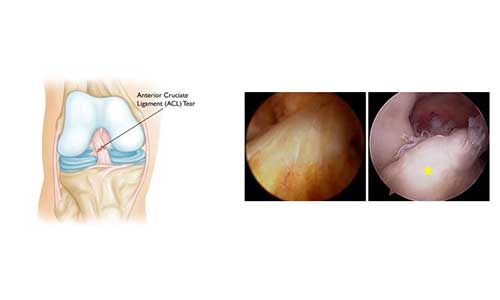 It is estimated that 70% of ACL injuries are caused by mechanisms that do not involve athlete contact with another athlete, while 30% of injuries are the result of direct contact.

The injury mechanism often involves deceleration and rotation of the knee or abnormal landing on the certain leg.

Several studies have shown that athletes have a higher incidence of ACL injury than male athletes in some sports. This is probably due to differences in fitness, muscle strength and neuromuscular control. In addition, the specific knee alignment (Q angle) in women and the effects of estrogen on the joint have been suggested as possible causes.

During the injury, the patient immediately experiences acute pain and edema is developed in the joint, causing instability, while the patient feels that “the knee is out of position”. In a few hours the edema exacerbates the feeling of pain and inability to flex and stretch the joint, leading to inability to stand up and walk.

At the initial assessment, the Orthopedist will request a radiological examination to rule out more serious injuries such as a fracture near the tibia (tibial plateau). In addition, in the suspicion of an ACL rupture, the physician may recommend magnetic resonance imaging for detailed imaging of the ACL, the meniscus and other knee ligaments.

However, beyond the aforementioned imaging examinations, the diagnosis of ACL rupture is purely clinical, and is based on accurate and detailed examination by the physician.

In the event of a total rupture of the ACL, the examiner observes an increased anterior-posterior tibial movement in relation to the femur (especially compared to the normal leg).

Another test for ACL rupture is the pivot shift test. In this test, the tibia starts moving forwards when the knee is fully extended, and then moves backwards and forwards in relation to the femur when the knee is bent over 30 degrees. 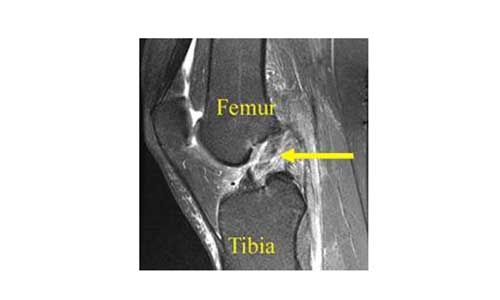 The progression of an ACL injury without surgery varies among patients and depends on the level of activity, the degree of damage and the instability it causes.

The prognosis of a partial rupture of the ACL is often favorable to the patient, with a recovery period of approximately 3 months. However, some patients with partial rupture exhibit severe symptoms of instability and need to be monitored regularly to assess joint stability.

The total ACL rupture has a worse prognosis. Knee instability is apparent and prevents the patient from sporting activities involving leg rotation and weight loading, while in some cases even walking can be affected. On the other hand, patients who continue to participate in sports without any symptoms of instability are also described. This variability in symptoms is related to the severity of the initial injury as well as the patient’s physical requirements. About half of ACL injuries also include the meniscus, the articular cartilage or other ligaments. In addition, rupture of the ACL may cause secondary damage to the knee structures. Specifically, recurrent episodes of instability cause some sort of meniscus damage (90%) when reassessed at 10 years after initial injury. Likewise, damage to the knee articular cartilage occurs in 70% of patients after an ACL rupture. 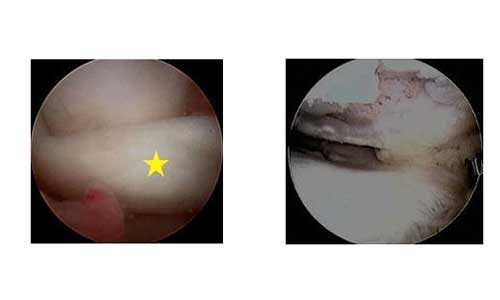 With conservative treatment, physiotherapy can help restore the knee to a great extent, to the pre-injury condition. With special programs the patient can be trained to regain the stability of the joint. In addition, he/she can make use of a functional splint or knee pad. However, many patients who choose to treat the injury conservatively exhibit secondary knee injuries due to repeated episodes of instability.

In the case of combined injuries (ACL rupture with other knee injuries) surgery is usually recommended; however, the patient may choose the conservative treatment.

Non-surgical treatment of a single ACL rupture is indicated for the following patients:

Recovery after an ACL rupture cannot be performed with simple suturing, as it has been proven that it fails over time. Consequently, the joint is replaced with a tendon graft.

The grafts commonly used to replace ACL include:

Patients undergoing surgical repair of the ACL exhibited long-term success rates of 82% to 95%. Recurrent graft instability and failure occur in approximately 8% of cases.

The goal of the surgery is to restore the ACL and correct functioning of the ligaments for a fixed knee, which will allow the patient to return to athletic activities. There are a number of factors that the patient must take into consideration before deciding in favor of or against surgery.

Adult patients involved in sports or labor that requires rotation or continuous change of rotation, as well as those in heavy manual labor, should consider surgery. This group also includes older patients, because it is activity that determines the need for surgical treatment, not age.

In adolescent patients, surgical repair of ACL rupture can cause epiphyseal plate injury, leading to bone growth problems. For this reason, the orthopedist may delay the operation until the child is closer to skeletal maturation or modify the technique of surgery to reduce the risk of injury to the epiphyseal plate.

A patient with ACL rupture and significant functional instability has a high risk of developing secondary knee injuries and should therefore consider surgical repair of the ACL.

Specifically, an ACL rupture with a combination of meniscus (50%), articular cartilage (30%) and collateral ligaments injury is common. The so-called “unfortunate triad” refers to the rupture of the ACL, the medial meniscus and the external oblique muscle. In all these cases of combined injuries, surgical repair leads to better long-term results.

Possible problems after using the patellar tendon include: 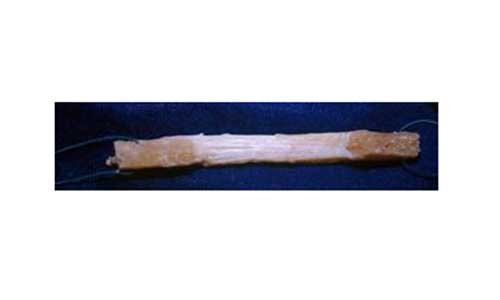 Surgeons who prefer the posterior femoral muscles as a graft claim that there are fewer problems associated with the donor site, including: 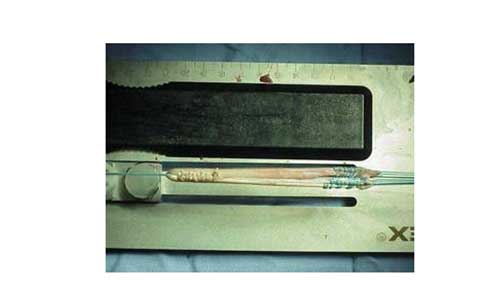 There are some indications that patients who exhibit hereditary ligament looseness and knee over-extension may present an increased risk of postoperative graft loosening and therefore some colleagues recommend the use of a knee pad for these patients.

In addition, since the posterior femoral muscles provide dynamic support against valgus movement, some surgeons consider their use a contraindication for the reconstruction of the ACL.

Allografts are grafts isolated from cadaveric donors and are becoming more and more popular.

They are usually used in patients after a failed attempt to repair the ACL rupture with autografts or those who need more than one ligament to be reconstructed. The advantages of using an allograft include elimination of pain caused by the surgical procedure to isolate an autograft, reduced operational period and smaller incisions.

However, allografts are associated with a risk of infection, including the transmission of viruses (HIV and Hepatitis C). Such complications have led to improvements in allograft processing. 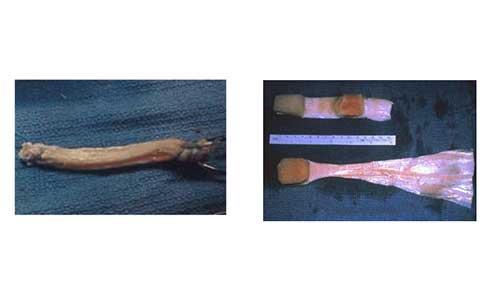 Prior to surgery, the patient is recommended for physiotherapy. Patients who have a stiff, swollen knee with a deficit in movement range may present several post-operative complications. Usually, the surgery is performed 3 to 4 weeks after injury.

Surgery usually begins by examining the patient’s knee while being completely relaxed under anesthesia. This final examination is used to confirm the rupture of the ACL.

Depending on the case and the surgeon’s preferences, the graft is collected (or is defrosted in case of an allograft), and after being prepared, the surgeon places the arthroscope and tools into the joint. After careful cleaning, any meniscus damage is restored.

Based on the most commonly used techniques in the repair of an ACL rupture, bone tunnels are opened in the tibia and femur, so that the implant can be placed in exactly the same location as the ACL and with the same direction and applied tension, as possible. The graft with the help of sutures and a special needle passes through the tunnels and is stabilized with the desired applied tension by means of a screw or fasteners. The materials used to stabilize the graft are not removed.

Variations in techniques include different incisions and graft fixation materials that change according to the circumstances and the surgeon’s preferences. Before finalization of the procedure, the surgeon checks the graft and verifies its correct applied tension. This is followed by suturing in consecutive layers. The patient usually is discharged on the same day or the following one. 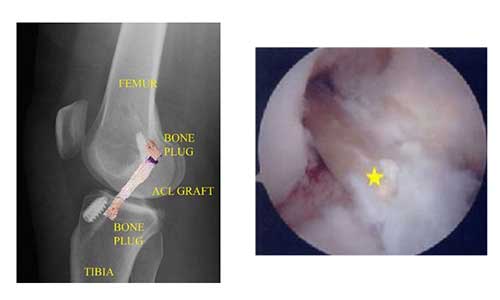 Physiotherapy is an important part of recovery after ACL restoration, with exercises starting immediately after surgery. A large part of the success of the ACL reconstruction depends on the patient’s compliance with the intensive physiotherapy program. With the new surgical techniques mentioned above and the graft properly stabilized, an accelerated recovery pathway is achieved.

Post-operative course: During the first 10-14 days after surgery, the wound should be kept clean and dry and emphasis should be placed on tissue healing and strengthening of the quadriceps.

Ice therapy reduces edema and pain intensity, while passive flexion and extension of the knee may be useful. Charging of the patient’s leg is determined on a case-by-case basis.

Recovery: The goals of recovery include reducing edema, maintaining mobility and restoring full range of knee movement, as well as strengthening of the quadriceps.

The patient may return to sports when pain and edema have subsided completely and complete muscle recovery of the leg has been achieved. The sense of balance and propriety of the joint are gradually restored and the use of a splint or knee pad can reassure the patient. The entire procedure lasts from 4 to 6 months depending on the patient’s post-operative compliance and the surgical technique used.